In Tarot Nerds, a FaceBook community, someone posted asking us to share our favourite card(s) from our primary decks. Since I use the Zombie Tarot, I pulled 6 cards that I find aesthetically pleasing, art-wise.

A quick shuffle of the cards before laying them out and they fell into place to look as if the images were telling a story. 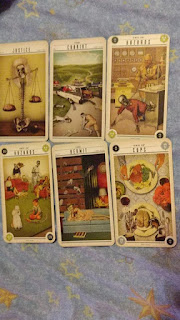 This sparked some inspiration in the hobbyist writer in me, and a short story has started floating around in my mind.

I'm unsure about word count, but I'm aiming to have a short chapter for each card. I'm also unsure about how often to post each chapter; right now, I'm thinking once a week primarily due to my work schedule.
at May 13, 2018


“I feel trapped,” Mike uttered to himself as he watched the gas-masked scientists open his cell door. After all, why would they let him go now, out of the blue? What awaited him on the other side of his cell, outside of the re-purposed jailhouse?

“Follow the path,” came a breathy, mechanical response from one of the lab coat wearing figures, the lights reflecting off the glass goggles.

Mike hesitated, wondering if they were waiting for him to let his guard down before pouncing on him, then forcing him to succumb to their poking and prodding like a lab mouse. Slowly, he walked out of his jail cell, and was greeted by two other scientists grabbing each of his arms and escorting him towards a heavy door with emergency exit warnings around it. Instead of being greeted by an alarm as the door was unlocked and shoved open, he was greeted by the early morning light and pungent smells of the zombie’s rotting flesh.

After getting his bearings, Mike noted the tall fence, encircling the building he assumed, as well as long stretches of metal mesh creating what appeared to be large outdoor corridors.

“I’m not some goddamn Guinea pig for that psycho doctor,” he huffed as he followed the chain-link maze to the next building. There was no hope of escape; razor wire lining the top rods of the fence, razor wire and cement keeping the bottom firmly in place.

He knew the doctor that was behind his capture. This same doctor was controlling the scientists that poked, prodded, and branded him.

As he walked, he heard the hisses and growls from nearby zombies scavenging about for their next meal.

“What the fuck?” Mike gasped as he saw a row of buildings; each had a chain-ling fence winding to the doors from the same building he came from. There were odd symbols above the doorways, obviously separating the other survivors and doing sick tests on them as well. The building he was being sent to had the same symbol as the brand that scarred his left forearm; a bladed weapon of some sort, either a knife or a sword. He didn’t care about figuring that out, he had other problems to worry about.

Drudging along, Mike finally made his way up to the door of his next prison where he was greeted by two guards wearing gas masks. One of the guards grabbed his arm and forcibly twisted it to see the brand.

“He belongs here,” said a robotic sounding voice as the guard holding his arm signaled the other guard to open the door.  Once the door was opened, he was shoved into a dimly lit hallway and told to follow it until he reached a big room and someone would pick him up.

Mike followed the hallway, tortuous sounds echoing keeping him on edge. He arrived at the brightly lit room and saw a few others sitting in chairs, scared eyes watching him as he observed his new surroundings.

This story was a bit of a challenge to write as I haven't written in years. Having a prompt did help, but trying to keep the feeling of my assigned card while still spinning the story in the setting I was envisioning proved to be a bit more testing than I was expecting. I hope I did the general feeling of the card justice. I hope to finish out the story in the near future as I was unable to complete it before July 8th due to my personal life and work interfering a lot with my schedule. Perhaps the Eight of Swords energy had something to do with it?

About Eight of Swords: 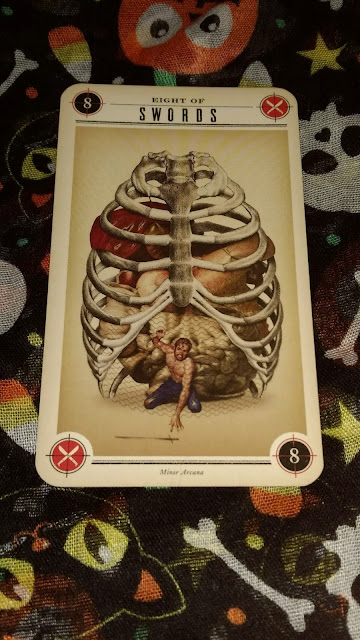 The Eight of Swords is a card that can indicate restriction or imprisonment of some sort. While Zombie Tarot's take on the card doesn't follow the appearance of the traditional RWS artwork, yet the feeling of being stuck or trapped is still there. While that sounds like a negative, it can also have a silver lining of bringing underlying issues forward in order to assess them. Bringing the negatives to light and working through them is how we move forward and grow. There are a myriad of other cards that have a "negative" association to them, but in actuality, they're not as negative as they seem. They offer some sort of positive aspect though it's not always seen right away.

Swords are predominantly a Gemini suit. The number Eight (8) shares traits with Gemini in regards to having the duality. With Gemini and Eight being associated with the Eight of Swords, they can be a driving force in breaking out of the imprisonment that the card portrays.

Sometimes we have to face our demons in order to get to where we want to be. Don't be afraid to ask for help if needed, or to get a little dirty along the way.

I hope you enjoyed this short story for the very first International Tarot Day!!

The image of the trio sitting on the bench is what really jumped out at me and caught my attention. So far, I only have a Thoth deck (that's missing the Wheel of Fortune), a few different Oracles, and all of my other tarot decks are based off the RWS system, so this Manara deck would be a whole different system to learn as it's a Lo Scarabeo deck.

Blog Sunday - Firerose Tarot: Colour In the Cards and How to Use It

A wonderful British friend of mine over at Firerose Tarot shared this blog back on June 23rd:

Colour In the Cards and How to Use It

It's definitely a worthwhile, but short, read. She offers a few of the more general and well  known colours and their meanings, as well as how to try to apply them to a reading.

This is some useful information as she also encourages readers to use their own interpretations on the colours in readings and to not stick too closely to generalized meanings, as people interpret things quite differently from each other.

When I'm ready to start on the colour-your-own RWS deck, I'm planning on using colours that I feel fit the images more, thus making it a more personal deck.
at July 02, 2017

Menage a Tarot is a monthly podcast, and is also about an hour long per episode.

It's a podcast between three people: My Own Minister, Daily Tarot Girl, and Modern Oracle Tarot.

June 26th, 2017 I listened to two of the episodes as I had some time to listen to and focus on a couple of hour long episodes.

The first episode was essentially getting to know the trio involved with bringing the podcast to life, the second was more about doing third-party readings (i.e. reading for someone that's asking a question about a spouse/partner without said spouse's/partner's consent) as well as other questions that each reader refuse to answer.

I wasn't sure how I'd feel about hour long podcast episodes, but I thoroughly enjoyed the longer length and listening to three different viewpoints all at once.
at July 01, 2017

Free Print Your Own Decks - Lenormand

I don't own any Lenormand decks, much less having read any sort of spread with that formula of divination. However, I do have an interest in learning to read with Lenormand decks at some point.

This came into my radar today, thanks to Tarot Nerds: Free Holiday Learning Deck by Carrie Paris. It's a good place for beginners as she included some keywords on each card to help assist in learning Lenormand.

I have these bookmarked for now, but am thinking of printing them out on regular printer paper and taping them to index cards so I can add other keywords that also resonate with me. As for when I'll be able to get it done, I don't know as I currently don't have a car to visit the library to do some printing.

Being a lesbian myself, I've been casually keeping an eye out for a specifically lesbian based deck. So far, one of the few decks that's popped up is known as Thea's Tarot.

It's an out of print (OOP) indie deck that was published back in the 1980s by Ruth West.

Since it's an older deck, as well as being OOP, it's fairly pricey. I've seen a copy for sale on ETSY for $75+ and am not sure how much the deck would sell for on eBay whenever it crops up.

For now, I'll be admiring the artwork via Google and waiting until I'm able to acquire this deck either via trading, payments, or both.
at June 28, 2017

In Tarot Nerds, a FaceBook community, someone posted asking us to share our favourite card(s) from our primary decks. Since I use the Zombie...

Coyote Tarot
30-something Coyote Therian with a love for photography. Student of Tarot, Sigils, Shamanism, Runes, and possibly Palmistry down the road. Lesbian/Pisces/Pagan